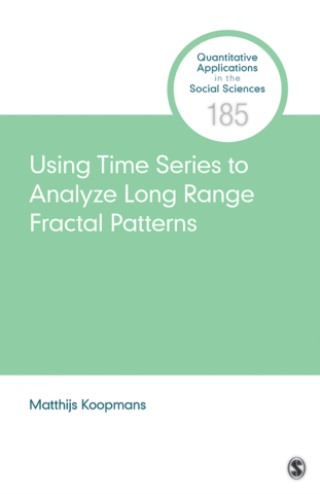 Using Time Series to Analyze Long Range Fractal Patterns presents methods for describing and analyzing dependency and irregularity in long time series. Irregularity refers to cycles that are similar in appearance, but unlike seasonal patterns more familiar to social scientists, repeated over a time scale that is not fixed. Until now, the application of these methods has mainly involved analysis of dynamical systems outside of the social sciences, but this volume makes it possible for social scientists to explore and document fractal patterns in dynamical social systems. Author Matthijs Koopmans concentrates on two general approaches to irregularity in long time series: autoregressive fractionally integrated moving average models, and power spectral density analysis. He demonstrates the methods through two kinds of examples: simulations that illustrate the patterns that might be encountered and serve as a benchmark for interpreting patterns in real data; and secondly social science examples such a long range data on monthly unemployment figures, daily school attendance rates; daily numbers of births to teens, and weekly survey data on political orientation. Data and R-scripts to replicate the analyses are available in an accompanying website.

Dr. Matthijs Koopmans, professor of educational leadership, joined the faculty at Mercy College in 2011. Previously, he worked for several educational research organizations, including the Strategic Education Research Partnership Institute, Academy for Educational Development and Metis Associates. He has taught at several colleges in the greater New York metropolitan region (Hofstra University, York College/City University of New York, Adelphi University and Yeshiva University). As an independent contractor, he has conducted evaluations for MGT of America, Institute for Student Achievement, National Urban Technology Center and Newark Public Schools. In scholarship, his areas of focus are the application of complexity theory to education, cause and effect relationships, and the estimation of fractal patterns in time series data. This book pursues the latter interest, which stems from a belief that the effective application of principles of complexity theory in the social sciences should include attempts to extend conventional parametric models to the estimation of dynamical processes. He published his research in numerous peer-reviewed journals and continues to present his work at national and international scholarly conferences. He is a founding editor of the International Journal of Complexity in Education and serves on the editorial board of Nonlinear Dynamics, Psychology, and Life Sciences. He earned his Doctorate in 1988 from the Harvard Graduate School of Education.